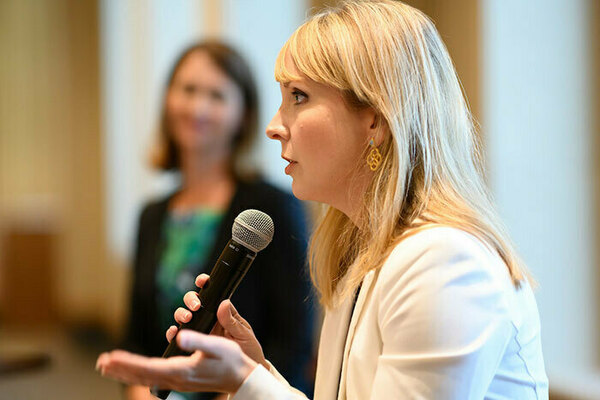 “What I look for are people who are very talented, those who call out insights, and bring their powers for good to move their message forward,” said Jenifer Robertson ’98, executive vice president and general manager of AT&T Mobility.

Whitmire told students that there are two primary challenges that new data scientists encounter. The first is finding the data with which to work—often an unexpected problem after being fed highly curated, quality data in a classroom setting.She and Jenna Whitmire, vice president of analytics and marketing technology for AT&T Consumer, shared their own insights with students from around the country who are enrolled in the University of Notre Dame Online Master’s in Data Science program. Students graduating in 2022 and 2023 were combined for the annual August in-person immersion on campus.

“When you get in the real world, there are multiple studies by third parties who come to help companies like us who ask, ‘hey data scientists, how much of your time do you spend trying to find data?’” she said. “And the answer is 80 percent.”

The second challenge is effectively communicating a suggestion or data-driven decision to a business decision maker.

“You have to simplify it for people,” Whitmire said, noting that she discussed the issue with another at AT&T who told her, “Nobody cares how you got there; they only care about the answer. We don’t have patience to hear about the process because we are making so many decisions that matter so much, and you really have to boil things down and make your key points.”

One of the decisions the company made was whether to enter the retail store footprint. AT&T had a bias, she said, in originally thinking that people only wanted to make purchases online. Through studies, they learned that people wanted to go into brick and mortar stores because they wanted someone to sell them a product and help them set it up, transfer data, and leave with a working device.

The company used four trillion data points to determine where they could place stores with the highest potential for success, which led to a model that can predict the number of new customers with 94% accuracy, Whitmire said.

Whitmire stressed it was easier to implement changes when there was good communication from data scientists that described “this is how we were doing it before, which was inefficient and probably didn’t lead to the optimum outcome, and now with our new system we will be able predict with 94 percent accuracy exactly how many customers you’ll have as well as your potential range of performance.”

Roger Woodard, director of the master’s program, said he appreciated that Robertson and Whitmire emphasized the importance of communication, which is a topic he has heard from a lot of other corporate partners.

“It’s one thing we really emphasize and are very proud of that, and I was pleased that they also talked about the ethical side of data science,” he said. “When we talk about students coming out of the program as three-dimensional data scientists, where they can do the technical, the communication, and are ethical, our corporate partners are telling us this is what they are looking for.”

The talk energized students in the program, including Gabrielle Taylor, from New York City, and Rick Milliken, from Cullman, Alabama. Milliken, who works for AT&T, had learned about the program through a colleague and decided to sign up because of the uniqueness of the program as well as Notre Dame’s reputation.

“I like how organized this program is, and I was very particular about what type of program I wanted,” said Taylor. “I wanted the technical side, but also the business side, and Notre Dame checked all those boxes.”

Originally published by Deanna Csomo Ferrell at science.nd.edu on August 24, 2021.