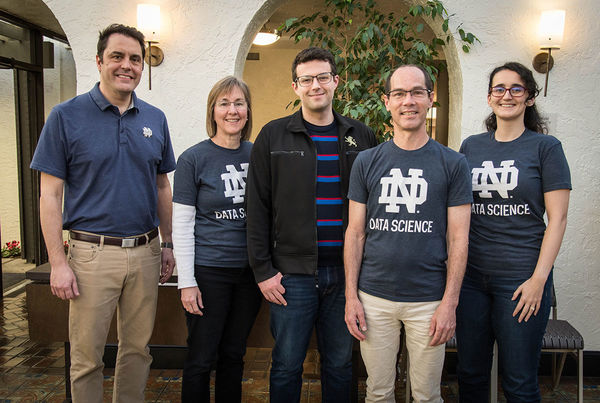 Although South Bend has full broadband coverage as defined by the Federal Communications Commission, adoption remains spotty and the area’s fiber footprint is low, according to a study completed by a group of students in Notre Dame’s online Master of Data Science program.

In a partnership with city officials, the student team found that areas with a majority of renters, people of lower income, those without college degrees or either high population or low housing unit density (found in? more rural areas) had the least amount of broadband buy-in. Though the statistics may seem intuitive, according to the study, the model will primarily be used as a starting point to assist the city officials as they plan for broadband access and adoption programming.

“We started this project in the spring semester before we entered the current pandemic situation, but with kids forced to embrace e-learning, broadband is more important than ever,” said Denise Riedl, chief innovation officer for the City of South Bend.

Data science students Matthew Bomberger and Annemarie Colino both worked on the project. In addition to digging into the demographic data regarding who subscribed to broadband, they compared it to adoption rates in similar cities including Fort Wayne, Indiana; Dayton, Ohio; and Champaign-Urbana, Illinois. The team discovered that South Bend had lower broadband adoption than these cities.

In addition, the analysis found that South Bend had a smaller fiber footprint than the peer cities, potentially impacting the future of wireless 5G and higher speeds in the area.

The project allowed the group of data science students to expand upon what they learned during the 21-month program.

“I think the primary benefit of a project like this is having a practical application in which to evaluate data and come up with different ways to find a solution,” said Bomberger, who lives in Seattle and does business analytics, data warehousing, and metrics for T-Mobile. “A lot of the projects during the program’s course work itself were practical in nature, but they were designed to have very specific solutions.”

The capstone project was one of seven that stretched the data science students’ skills and helped the organizations they studied. The 41 students in the cohort were organized into teams. Each tackled a question from one of six different organizations. In addition to the team who worked on the South Bend broadband project, two groups completed projects for MedThink, and one group apiece with Horizon Educational Alliance, the Notre Dame Alumni Association, Advanced Auto Parts, and Katz Media.

“The capstone project is an invaluable experience—it’s the most important experience in the entire program,” said Roger Woodard, director. “The students learn aspects of data science that cannot be taught in any classroom, and afterward, they can go into any data science job and perform at a high level.”

The city sought out the students from the Data Science program to look two or three levels deeper than the tract-by-tract information the city already had about who had subscriptions for internet services, Riedl said.

“They were really successful and really got in the weeds of the data, and got into the combination of federal census data, and provider-reported data on speeds and subscriptions,” Riedl said. “This is a new level of analysis that is incredibly valuable.”

Colino, who works as a senior business manager for AT&T, also in Seattle, said she enjoyed the capstone project partly because of the teamwork involved. But the entire master’s program—which is mostly online with two, in-person immersion weekends—was engaging and worthwhile, she said.

She and the other students in the cohort graduated May 18.

“Notre Dame has done a fantastic job of taking adult learning online, and making it as immersive as possible; you really feel like you’re in class together,” Colino said.

For more on the Online Master’s in Data Science program, visit https://datascience-info.nd.edu/

Originally published by Deanna Csomo McCool at "science.nd.edu":https://science.nd.edu/news/master-of-data-science-program-assists-south-bend-with-broadband-data-analysis/ on May 29, 2020.